The other day, I ran out of laundry soap and just didn’t feel like driving into town to go to the store

Now I had told Aileen about homemade laundry soap a while back. She actually made it and had been using it for some time. I just always had an excuse as to why I hadn’t tried it..still had store bought soap left…not enough time to make it…blah blah blah.

Well, let me tell you I will NEVER have another excuse again!!!

I am sure Aileen will post the recipe that she uses for her detergent as she loves it, but I wanted to share with you the one I used.

I have altered this a bit because I found it too think when only making 2 gallons so I followed what Jillee did and made it into 3 – Gallon containers.

I love this recipe because you can use any kind of bar soap you happen to have around the house. I just happened to have a bar of Irish Spring. 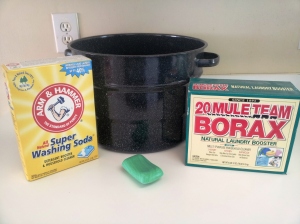 Grate your bar of soap into your pot. 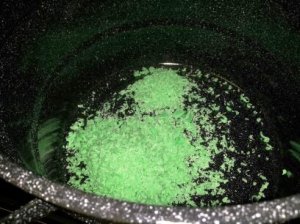 Fill one gallon jug and pour water into pot with grated soap. Cook until the grated soap dissolves. You may have a couple of little pieces that don’t completely desolve and that’s ok.

Add the Borax and washing soda.  Bring to a boil. It will coagulate. (ok mine didn’t exactly coagulate but still turned out just fine in the end)

This is where I use the funnel and separate it between the 3 – 1 gallon jugs or if you are going to follow the original recipe then just fill 2 jugs but I still feel that is too thick.

Fill the remainder of the 3 jugs with water and shake well. (omit this step if only making 2 gallons)

Mine was very liquidy when I poured it into the jugs but thickened as it cooled.

Now you have 3 gallons of homemade laundry detergent.

This won’t make many, if any, suds. Suds don’t equal clean!

I have to tell you that I absolutely love this Laundry Soap!! It works great, even in cold water.

Now if you figure out the cost of all of these items it is far less than an average bottle of Laundry Soap and is all natural for the most part depending on what bar soap you are using.

Give this a try and let us know what you think!

Make it a great day, you deserve it!!

One thought on “I Finally Gave In To Homemade Laundry Soap and Am SO Glad I Did!”

A Southern Gentleman's Guide to Cooking and Baking

The Self Sufficient HomeAcre
The Southern Lady Cooks